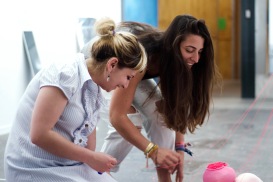 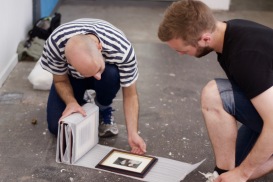 All photographs courtesy of Adriana Carvalo

Under Construction consisted of objects and possessions, paintings and sculptures, photographs and prints, together with video and sound works. Their use and their potential to be something more: for example objects and artworks as vessels to discuss more sensitive subjects such as migration and gender; and objects that invite other modes of self expression, were explored by the artists. Our relationship with technology played a significant part in the exhibition: production, printing and photography techniques – new and old – and audio and video recorded, manipulated, presented and re-presented. This was also a vehicle for conceptual exploration: the effect and relationship between mass-production and us; how screens are fragmenting and yet increasingly becoming an intrinsic part of every day life; and how technology is letting us down in terms of sustainability;

Each artwork, with its own unique research and origin, united to reference the identity of their makers.

Special thanks to Costanza Tagliaferri for helping with ideas and promotion, Adriana Carvallo for taking photographs during the install and private view, Yegor Isayev for help during the install and the use of his equipment, Nick Greenglass for the poster design, and Rick Carey’s technical assistance, without which the exhibition could not have happened. Curated by Tom Goldstone (tom_gold@hotmail.co.uk)